Being snowbound provides me with the opportunity to keep up with my blog. We got over a ft of snow and 4 ft high piles around the house. The wind is whistling and even though the sun it out now the wind chill warning says -3 F. My car is in the shop getting snow tires put on so here I sit until that is completed. I live about 1/16 mi. from the auto repair shop and way less than that from the P.O., 3 stores, library, town hall and 4 eating establishment and the common or green as it is sometimes referred to. If you are outside of New England I will tell you that there is a common in most towns in New England. I found out some time ago that in Ohio and maybe other states in the midwest they never heard of New England. I guess we are provincial enough to assume we are famous. If not for weather, for history, for the ‘shot heard round the world’. Jokes on us. To finish that thought, a common is where cows, sheep, what-have-you were collected by the shepherd or young lad responsible for taking the cattle to pasture or summer ground. Like the ‘old country’. Then it became a training ground for the Minute and Militia companies formed to prepare men for defending our towns from whatever outside invader was current. I think it was also used as a marketplace for farmers and craft people, not sure, but it is now. In the town I live in it is used for fairs such as our annual Asparagus Fest, it has a gazebo-like bandstand where weekly bands play in the summer with a big HooHa on the 4th. Often these bands are funded with a grant from the Mass Arts Council. But everyday people go there to enjoy the beauty and peace. We have a fountain with a statue of a woman with lightly covered  breasts as Liberty. 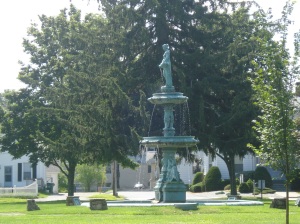 This fountain was boarded up for years because someone thought that the scant coverage was scandalous.  Probably encouraged lusty thoughts by pubescent boys, qv.,The Music Man movie.

This week I am watching Sons of Liberty on Netflix. Love it. I am sort of purist about the historical aspect including costumes and props and I find it distracting and very mildly irritating that people with the job of researching historical movies can’t do a complete job of it. I am sure I am not the only one who notices things like that. Why just during Christmas on the Hallmark channel they had a woman who was a violinist who wasn’t shown how to hold a bow and who scraped away on the violin as if she were sawing wood with no sense of rhythm. But back to historical stuff. The women in the movie were out in the streets with just their white batiste caps on. Never would have happened. They always wore a bonnet of some kind on top of it. The men’s hair was in the fashion of today’s women. a straggly mess with much of the hair tied back but straggles along side of the face. What is that about? People who have work to do find a way to keep it out of their eyes. Do they think Paul Revere worked on the fine detail of his silver pieces with hair in his eyes? Also men wore hats, tricorns, knitted caps, brimmed ones, military ones outside. When dancing in formal attire men and women wore gloves. Women wore kid and men wore cotton to avoid perspiring on the women’s kid gloves. When the British marched on Concord to capture the stores of arms, the battle was at the Barrett farm on the hill and not The bridge, the famous bridge where the embattled farmers stood to ‘fire the shot heard round the world’. Didn’t see the bridge in the movie at all. Not critical but it would have been nice. Ben Franklin was Ben Franklin. Sam Adams was a young hot head–probably was. George was good. Happy with George and General Gage was his evil nemesis. Didn’t know Gen. Gage’s wife was a traitor to England.  She wasn’t English but a New Jerseyite.  Gage was not pleased.  She and Dr. Warren had something going.  Storyline led us to believe that Gage was directly responsible for our hero, Dr. Warren’s horrible death. Costumes on the minutemen were correct. Anything farmers might wear. You might go to see a patriot day re-enactment sometime and in the wealthy town like Concord the minutemen wear matching uniforms in a lovely buff shade. Really?

Haven’t finished the series yet. I did like the series Turn. Setting on Long Island, NY during the Revolutionary War. Worked out to my satisfaction.