My computer tower lived on the floor,upright, under my desk. It occupied the space in front of a neatly contained bunch of wires connecting the printer, speakers, keyboard, internet antenna and screen. As soon as the wires left the velcro constraint it exploded into a snarled mess like a nightmare fishing line.  The thing that happened to change all this was a certain cat who decided to mark his territory and let the the tower have  it…right through the perforated side  G. came in and we opened it up and with paper towels and spray cleaner we quickly mopped it out. It worked for a while but the insult was too great and it quit. had it repaired 2x and gave up. The motherboard was damaged.

I decided to get rid of the wires and bought a sensible PC , I don’t do games.  In just a few years much has been improved.  It’s like having a new car. Lots of stuff to explore. 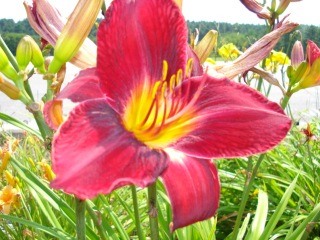 The fields here on the farm are looking like Eden. I go into the cooler and see what I am having for supper.  I have a bigger selection than a grocery store. I wish summer wasn’t so short.
Corn is never stored so if I don’t pick it myself or get out to the barn early morning, I don’t get any. Pickled pint jars of my favorite beets, the long red Forano. Also, put up many 1/2 pts of raspberry jam. I took out half the seeds and it’s like raspberry pudding. Lovely on a peanut butter and jelly sandwich. In my opinion, comfort food such as Wonder bread or equivalent is compulsory for a PB&J. Excellent whole grain bread steals the flavor f the add-ons.  It is a retro sandwich after all. Reeks of the 40s and 50s right along with bobby sox, cuffed dungarees, and my father’s shirt. After that era I wore brown pin-wale corduroys, button-down oxford, Shetland pullover, a corduroy blazer and Capezios.