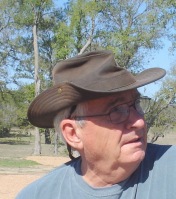 We finally landed jobs doing just what we wanted. I was teaching art and some crafts and Larry was doing music-live, DJing and karaoke at this really beautiful park in Fredericksburg, TX called Texas Wine Country RV Park.

Two weeks into that gig, it ended. God called Larry home.  Remember the good times and every day; tell your sweethearts how much you love them.